The prototypes for the Saab 99 Finlandia were made in 1976 at the Uusikaupunki Saab factory in Finland.
The car was lengthened some 25 cm by adding an extra piece to the middle of the body.
The “limo” went to actual production in 1977 when a total of 23 Finlandias were made.
The first prototype, a blue “Proto 1” is currently owned by a member of the Finnish Saab-Club.

Next year, 1978, the car was developed further and the middle window was removed (20 cars were made). Both the front and rear doors were made 10 cm longer, so the car remained a total of 20 cm longer than a normal Saab 99 Combi-Coupe.

Both the Uusikaupunki factory and the Swedish headquarters had interest in developing a lengthened Saab 9000. A prototype long 9000 was produced and it was 15 cm longer than the normal car.
The plans were buried when GM acquired Saab.

The prototype 9000 can be seen at the Uusikaupunki Saab Museum. Only the rear doors are longer than normal, so it takes a trained eye to spot the difference. The car looks quite balanced, it’s a shame it never went to production.

Several 99 and 900 Finlandias and CD’s are in the possession of Finnish Saabclub members, restored or awaiting restoration.

More info on Finlandias:
http://finlandia.saab99.net
And here are some nice photos of a 99 Turbo Finlandia: http://oh3tr.ele.tut.fi/~benjamin/saab/99finlandia1978-3/

A prototype for an actual Saab 900 Limousine was also constructed, but apparently it was never considered for production. The car was lengthened a total of 70 cm and it could carry 7 people.

Later, plans were also drafted for a “People Carrier” version of the “NG” 900. This was never developed to prototype state.

Sadly, this never came to be but some test engines and a fully functioning prototype was build.

The Saab engineers in Sweden had said that making a V8 fit the engine bay of the 9000 was impossible. The people at Uusikaupunki didn’t buy it and in 1988 produced a prototype of a V8 engine by combining two 4 cylinder Saab engines. The 4 litre Valmet TF (Twin Four) V8 engine put out almost 300 horsepower and it was mounted sideways under the bonnet of a Saab 9000. No body modification was necessary, the engine fit right in.

The engineers at the factory said that the V8 9000 was “a hoot to drive”. This is evidently backed up by the several speeding tickets that were gathered during the road tests.

Unfortunately GM didn’t find it necessary to further develope the V8 as they already had a lineup of V6 engines that Saab could use. The prototype 9000 is currently on display at the Uusikaupunki Saab Museum.

Weasel is a small and fast moving predator animal that is usually brown coloured. However, in the winter time it can go completely white to fit the snowy surroundings.

In 1985 the Finnish Saab dealership Scan-Auto produced the first Lumikko for a magazine competition. The idea of the competition was to upgrade a basic model with quite a little money. The Lumikko won. 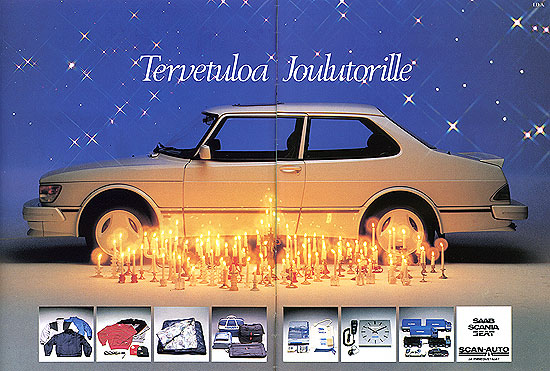 The car is a Saab 90 (another Finnish special, designed to prolong the life of the 99 by updating it a bit) fitted with the Airflow styling kit, Aero rims and all white paint. Also the interior was upgraded with some extra instrumentation and audio system.

A total of 10 Lumikko were made! (+ the one competition car). There are known to be some “fakes” and it is somewhat uncertain if a couple more “pre-series” cars were made.

The competition car and around 2-3 actual Lumikko are in the possession of the Finnish Saab-Club members. 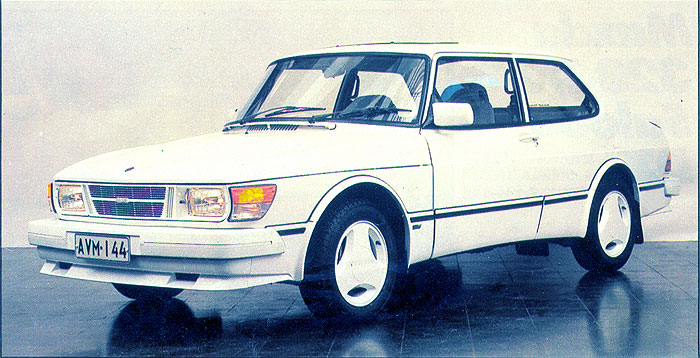 Update, more info:
Here’s some photos of the above car today. It’s awaiting full restoration. Most of the original extras still remain: The white airflow set with a one-off spoiler (a “cut to length” aftermarket product), Aero rims (painted white!), Saab audio system, heated seats, white mirrors and door handles, and the Finlandia roof hatch. The original airflow front spoiler has been lost, as is the original grille (in the photos you can see an older grille in place). 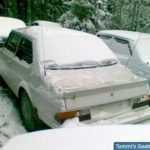 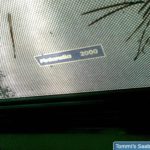 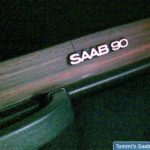 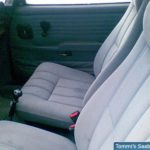 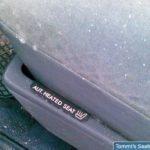 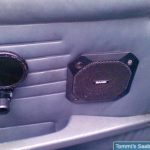 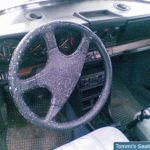 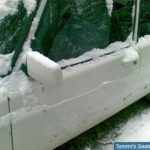 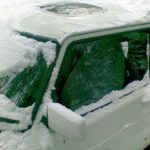 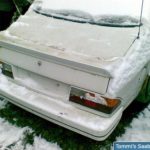 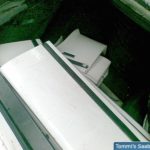 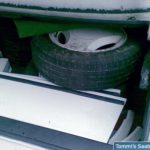 THE GOOD WILL POLICE CARS

As far as I know the two stroke Saabs were not very common as Police cars. The reason was propably the somewhat high price, but also the “unreliability” of the two stroke engine (which was usually due to user errors).

In Finland the Saab dealership Scan-Auto donated four Saab 96’s to the Police between 1965 and 1968. They were called “Good Will” cars, as they were mainly used for assisting motorists in trouble (flat tires and such). But other than that the police didn’t really have 96’s as patrol cars.

The first cars donated were a 1966 Saab Sport and a Saab Special. Later a 1967 V4 and a 1968 V4 were donated. They were painted all white and had a POLIISI sign and one blue light on the roof. Later the 1966 Sport was converted from two stroke to V4.

The cars were on active duty untill about 1970 but it is unknown if any have survived. Apparently they were used for high speed driving practise at the Police School after the actual patrol service…

The Saab 900 Racing Class was a popular “inexpensive” class in the 1980’s. The cars were 2 door Sedans delivered without upholstery straight from the Saab Factory. The rules restricted changes but adjustable chassis was allowed as were slick tyres. The Saab Turbo engine put out around 200 hp as radical changes to the motor were not allowed.

The car was not really designed for rallying, but here’s a 900 with higher suspension on less than smooth surface.. 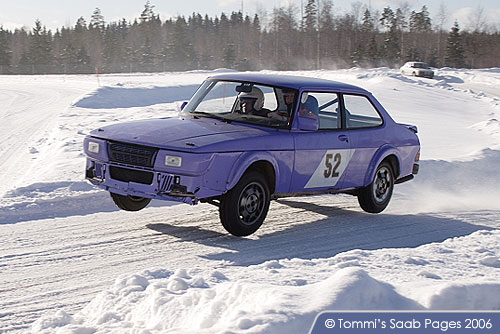 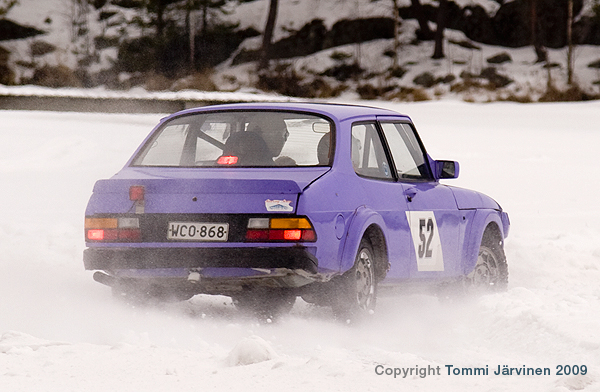 Update, more info:
The cars were 900 Turbos (with model designation Saab 900 Turbo M), minimum weight 1050 kg, top speed about 200 km/h. They were pretty much based on stock parts, but suspension was adjustable with a pretty free selection of springs, shocks etc as long as the mounting points were original. Aircooled brakes in front, stock in rear. Engines were 8 valve turbos with intercooler putting out about 200 hp. Gearboxes were strengthened 5-speed boxes and the gear ratios could be selected from what Saab offered. Racing clutch but no differential lock or ABS.

These limitations kept the costs down, so it was a pretty popular series.
The information on this page is based on articles in
– the “Saabisti” magazine of Saab-Club Finland
– the “Katto pois!” book (history of the Uusikaupunki car factory)
– “Aja” Saab dealership customer magazine

Please note, that a lot of the info is not “official” or from official Saab/GM sources, but based on accounts of individuals as they remember them.