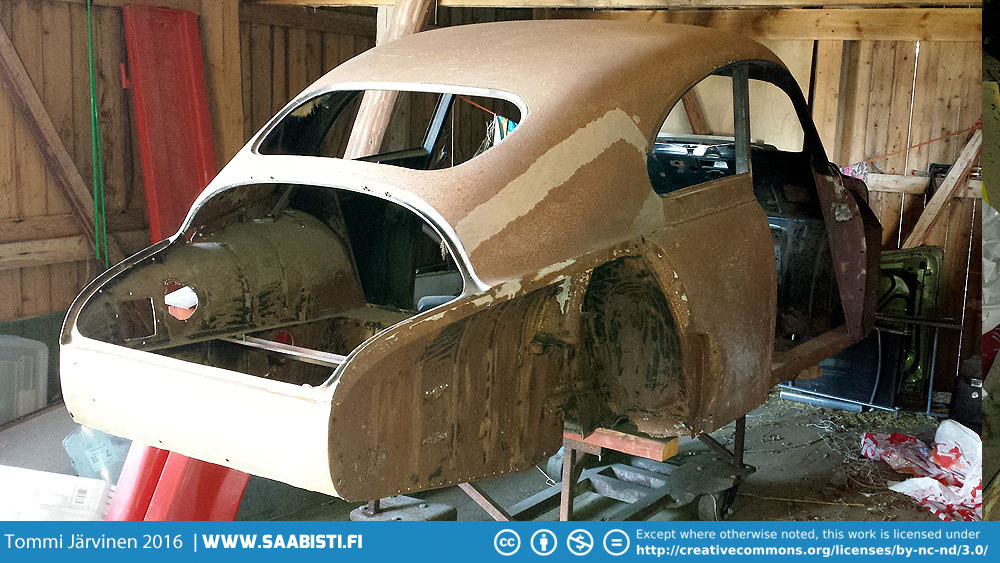 I got myself a 1959 Saab 93B DeLuxe. Three cylinders, 750 cc, three speed manual, suicide doors originally. Strictly speaking it’s not a barn find since the owner had it for sale, but it has stayed in a barn for 20+ years… But it most definitely is a basket case since it has been completely taken apart.

I had seen the for sale listing a few times, but the car seemed like too much project. After thinking about it for a while I decided to go at least see it anyway. Maybe it would be worth the parts if nothing else.

The parts were in a barn and it looked like quite a bit had been lost over the years. At least the original 750 cc engine, seats, roof lining, front hubs, and what not were missing.

The body was in another barn. Restoration had been started, but never gotten much further than taking the car apart. Some welding had been done (and need to be re-done), but that’s about it.

It was pretty obvious that a restoration is not really a good idea. But I have a few ideas on what to do with it…

I managed to get the price knocked down quite a bit and now I own a Saab 93B. It will be a long term project. There are other cars to finish first. So – no project posts on this for a long while. But some day…