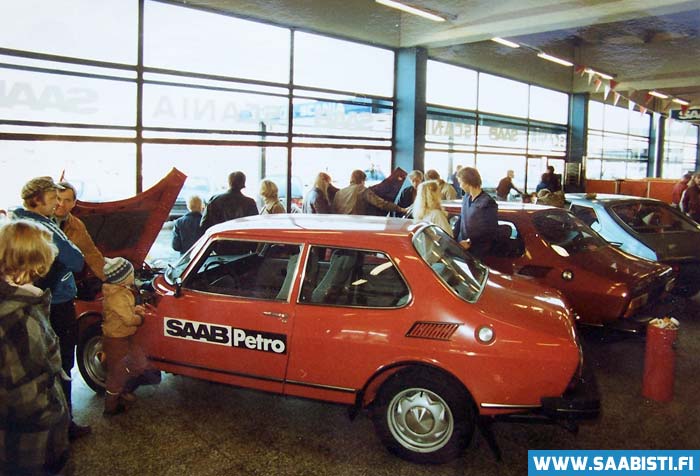 I posted earlier the “Saab V8 Engine – The Complete Story” article. It was originally written for the IntSaab2011 magazine. I have a few more short articles from that magazine and I decided post them also. So – here’s the first and more to follow in the next few days:

The 1970’s oil crises together with the rising fuel prices raised in Finland the concern that oil taps might be closed someday. The Saab-Valmet factory in Uusikaupunki decided to begin to develop the use of alternative fuels. The project resulted in the late 1970’s in a dual fuel system fitted into a SAAB 99, which made it possible to use regular gasoline as well as turpentine and kerosene (motor petroleum) for fuel. Gasoline was used for start-up and peak power and kerosene (or turpentine) at constant speeds. Turpentine could be manufactured in Finland from paper industry by-products, which made the project interesting for the government also.

SAAB 99 Petro was available through model years 1980 to 1984, but only in Finland and only as a 2-door sedan. Engine modifications were relatively minor – the compression pressure was reduced by changing stock pistons to those of the Turbo model. Electronic ignition system was also sourced from the Turbo. The fuel tank was divided into two parts, 19 litres gasoline and 40 litres kerosene. Both fuels had their own fuel lines and pumps. The fuel selection was completely automatic.

The 99 Petro never reached significant sales as the kerosene prices first started to rise, then the distribution network was closed down, and finally kerosene manufacturing was ended altogether.