Well, I have to get the “B105” running again (shot timing gears and some gearbox trouble), so I started by removing the engine and gearbox. Also washed the engine bay. 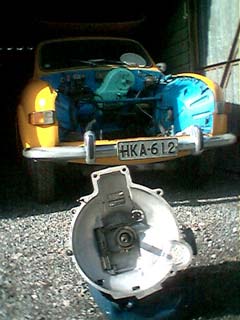 I then removed replacement engine and gearbox from one of the 95’s. I took the engine apart to get the timing gears and installed them to the 96’s engine. (I couldn’t use the 95 engine as replacement since it has some glogged oil canals and doesn’t lift oil to the heads).

The timing gears were very good – now the engine is pretty silent, no rattling. 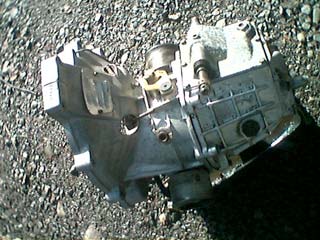 I changed the gearbox oil and put it in the 96 and then the engine. On the test drive it turned out that the second gear makes an awful noise – shot bearings!

No other option than to remove the engine and gearbox again.

I then put back the original gearbox which whines quite a bit (that’s not too dangerous). And after that also the engine, again.

Now it runs as it should, except the transmission whine. I think it will  last at least for the summer while we rebuild the other gearbox.