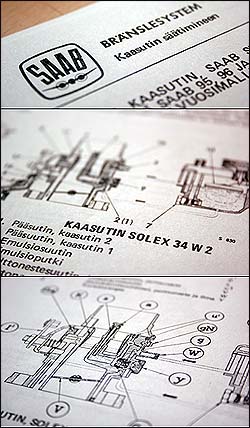 A Finnish enthusiast (Thanks Pauli!) sent me a copy of the service manual for the Saab triple carburetors. Much easier to plan the restoration and also to make correct adjustments.

The carburetor system and the carburetors are pretty simple, but there are some significant differences between them, such as the fuel level in the float chamber.

The second update concerns the exhaust system. My father is a member of the local motor sports club and he remembered a club meet some 40 years ago (!), where there had been a discussion about tuning rallysaabs! He made some notes back then and was certain that he still had them. It took days to find the notes, but now I have a basic plan for an adjustable expansion chamber!

This made it possible to experiment with the expansion chamber quickly to get the best performance. The drawing above isn’t in scale, but shows the idea.

I think I will make one just for the heck of it!