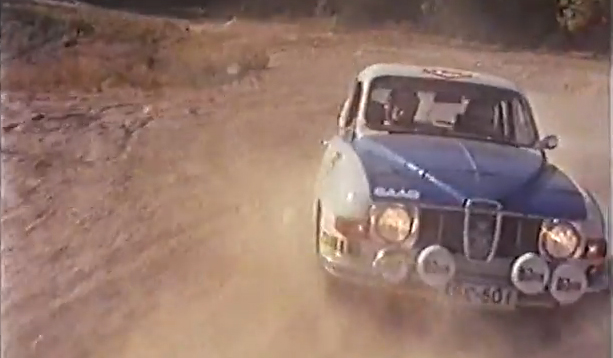 I came upon this really cool rally video of the Rally Of The 1000 Lakes 1976. Very nice footage. A lot about Saabs in there. Unfortunately it’s all in Finnish. So I wrote down short descriptions of key moments below.

The video is basically an advertising piece for the Saab Finland dealership Scan-Auto. (It is worth noting, that those days almost all Saabs sold in Finland were also manufactured in Finland, at the Uusikaupunki factory).

The 96 was starting to be at the end of it’s career in rallying – so no win, but pretty good positions for the old warhorse still!

3:46 Stig Blomqvist and Per Eklund walking back from the stage as both Saab Works Sweden entered 99s broke down.
5:00 Saab Works Finland – maintenance on the road.
8:45 Some Saab history

The history piece continues with Erik Carlsson in Monte-Carlo rally. Lots of nice photos in this section!

1:10 Eric Carlsson: “When we started racing in the beginning of the 1950s’ we had front wheel drive, big wheels, and the car was unbelieveably strong. We didn’t need a lot of maintenance. That’s why we won.”
2:28 Comments by Stig Blomqvist in Swedish, basically saying, that Saab is still a winning car.
2:50 Comments by Simo Lampinen in Finnish: “All you need to do is to keep the front wheels in the grooves. It doesn’t matter where the rear end goes, it can move around a lot. You just control the car with left foot braking.
On a rear wheel drive car you need to keep it in controlled slide in corners. The front wheels you keep in the groove – same as in a front wheel drive. But as the rear wheels slide off the groove you loose momentum as the tires hit the loose gravel outside the grooves.
On good roads rear wheel drive is fine. In difficult conditions front wheel drive is much better.”
5:20 Some in car footage from practice stage.
6:15 Saab 96 two stroke roll demonstration and some of Saab safety features.
6:55 Simo: “Already in 1969 in Safari rally we had the driving light washers. A few years later they became standard on all Saabs.”
7:25 Some more incar footage.
7:57 Really nice footage of Saab 99.