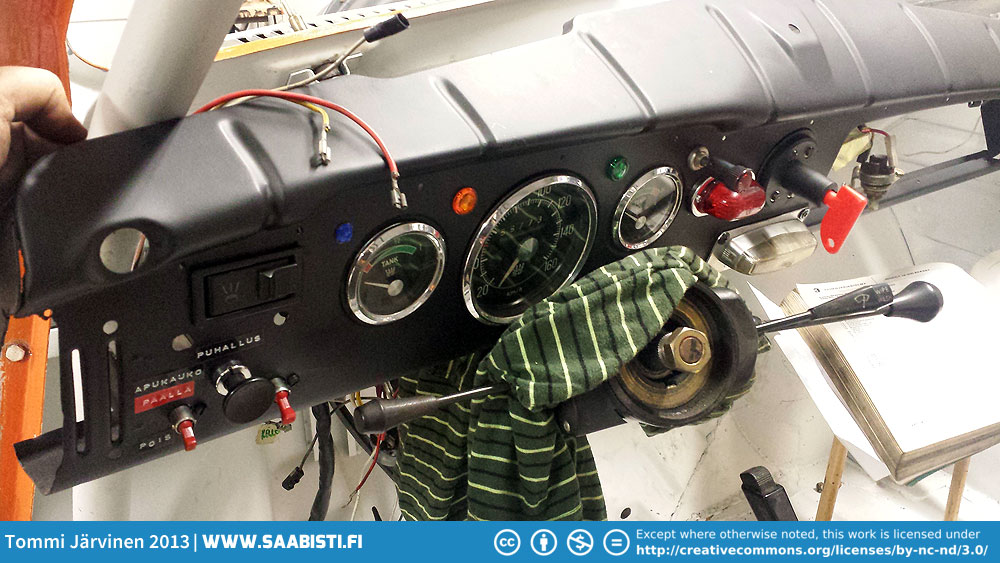 I started figuring out the electrical system on the V4 “Rally”. It’s a bit of a mess really… 😀 Old wires, unmarked wires, and all sorts of iffy connections…

The original wiring system had quite a few “hacks” already, and now I needed to do some more to make the wiring work with the two-stroke dash… But I have managed to figure most of it out already. When I have everything working I will replace all the bad wiring, solder all joins, and put in new connectors. I don’t want anything shaken loose.

Also, I took the wires to the back of the car through the cabin, on the driver side floor, instead of the original route through the pillars and roof. Much simpler that way and easy access if any changes or replacements are needed. I also changed the wire route on the exhaust pipe side because the original wire position would be right next to the silencer. It would have burned right through the wires.

I have also decided on what I’m going to do with the engine. I’m going to stick with the original plan of building the car as cheap as possible. Decent heads would probably cost 1500-2000 euros to have made and that’s just too expensive. So I’m going do some light modifications on the standard heads; open up the exhaust side, remove the part of the valve guides that protrudes into the intake and exhaust ducts, and grind the intake side to fit the UK style crossflow manifold, while keeping the original valves, lifters and rocker arms. I’ll put in a 7.9 camshaft, so I need to get stiffer valve springs and aluminium caps – which I need to buy. That’s about as cheap as you can get on the heads.

The block will be bored to 92mm (so I can use unmodified gaskets), Ford OHC pistons, 1.7 litre crankshaft, lightened flywheel.

I’m betting that should get me past the 100 Hp mark, but probably not much.

I’m concerned that the intake system is so high up in the engine bay. If I flip the car there’s a good possibility I might break the carburetors and crack the manifold. So I’m thinking about putting in a protection bar. A good position would be right in front of the carbs – it needs to be a little higher too. And it needs to be removable. We shall see…

As we changed the way the exhaust pipes are attached to the flanges (regular bolts instead of the original stud bolts), we needed to remove the studs from the heads we are going to use. Sometimes they come out easy – some times not. Here’s how to remove the more stubborn ones:

This method usually works fine. But of course if the bolt breaks it probably needs to be drilled out and a re-thread.