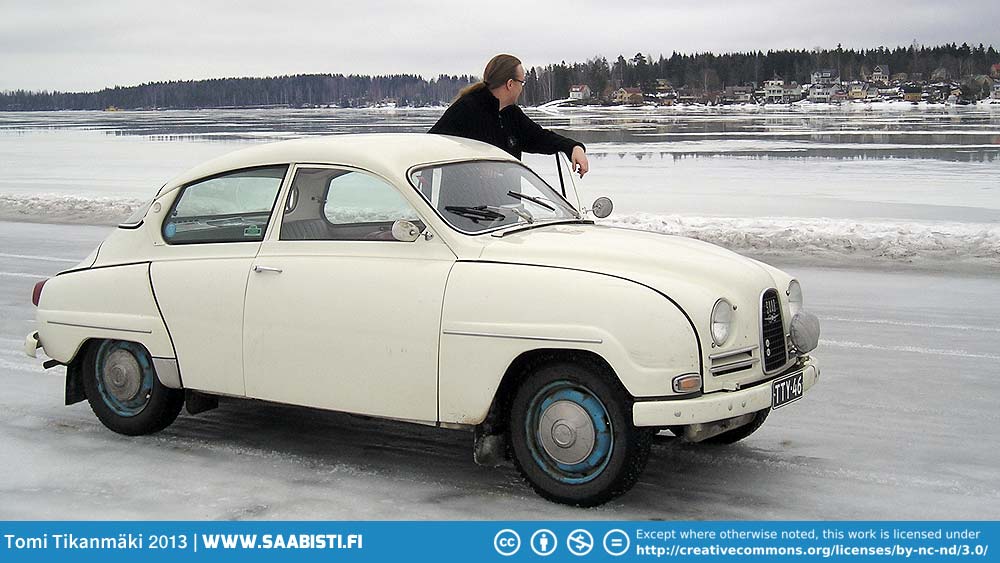 The Saab Club Of Finland spring meeting was held the past weekend at Imatra. Imatra is located some 350 kilometers to the east from where I live – Right next to the Russian border. I decided to take the two-stroke there despite the fact that the winter is going away very slowly this year…

The plan was to drive to Lappeenranta on Friday and back home on saturday – after the event. As it turned out, it didn’t go quite as planned.

As I was going to drive a long distance on the highway I wanted some protection for the ditch light at the front. It would be quite difficult to find a new glass for it if it got hit by a stone. Making the cover was also the first test for the Mitsubishi DU-108 industrial sewing machine I bought to do some upholstery stuff. Here’s a few photos of what I did:

The drive went fine from Nokia to Lahti, but after that the car started to develop some issues. It wouldn’t accelerate well and I had to drop the driving speed to under 100 km/h. I did get to Lappeenranta and to Tikkis’ place. We were planning on having a nice evening with sauna and a few drinks and then go to the event on saturday morning. But as we were cruising around Lappeenranta city the car got even worse and finally we just had to start figuring out what to do with it. I dried the obvious fix of changing the spark plugs but it didn’t help. So – we decided to take the car into Tikkis’ “Verkstad” and start to solve the problem.

Solving the problem turned out to take quite a bit of time – it took us the whole evening to find out that apparently I have a (small) hole in the fuel intake pipe inside the fuel tank. I need to keep the fuel tank pretty full for the fuel pump to not suck air with fuel. This apparently burned out the fuel pump and we changed it to a spare I had with me. But it seems that also the coil was giving less than perfect spark and we changed it for a Bosch original from Tikkis’ spare parts shelves. The timing was also checked using – of course – Saab original testing tool 😉

So – a little after midnight the car was running again. Time for five hours of sleep before starting towards Imatra and the event.

The drive to Imatra went well and on the way we set up some signs for the event participants. Photos from the event:

As fixing the stroker took all friday afternoon and evening I decided to stay for an extra day. We went to visit the local car museum (Etelä-Karjalan Automuseo). It has a small but nice collection. Here’s some photos:

On sunday it was time to start back home. But not before going for a few photos on the ice road near Lamposaari at Lappeenranta:

The drive back home was pretty un-eventful, except that I had to stop refueling a lot more often. The next order of business is to make a new fuel pump and coil setup, repair or replace the fuel tank, and clean and check the carburetors just to make sure there’s no issues there.