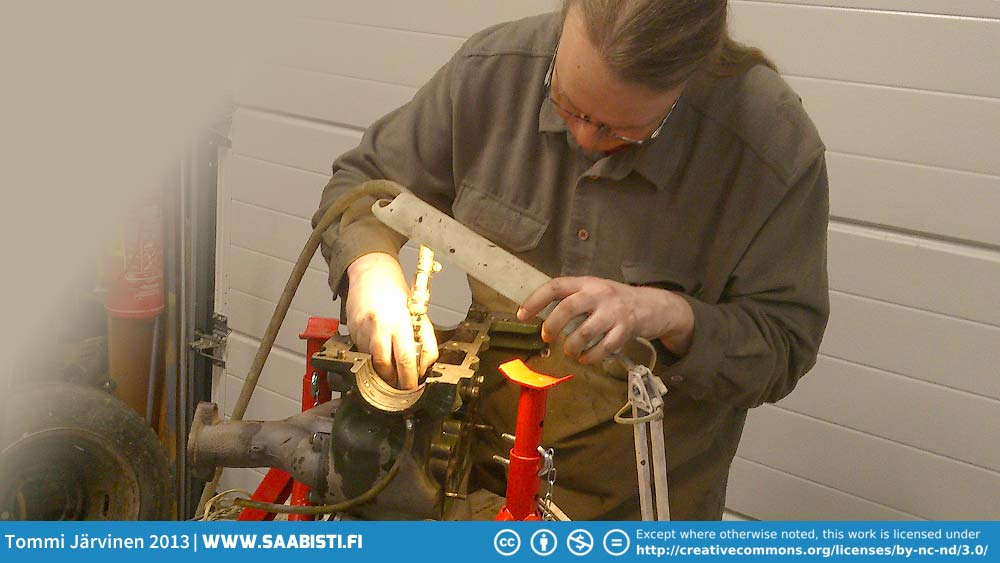 As I promised in the previous post – here’s a bit more info on what we did to fix the fuel issues on the two-stroke:

So – as we suspected the fuel intake pipe in the fuel tank had become corroded during the long period the car was stored outside before I bought it. On the long drive to eastern Finland the pipe collapsed because of the rust and caused all sorts of problems (read all about it here).

As I wanted to drive to the Saab Club driving season opening last Thursday we decided to fix the problems. The Saturday before the event we swapped the fuel tank and made some changes to the fuel system. Here’s some photos:

The bigger pipe was used as we suspected that maybe we put in a slightly too small pipe during the restoration. This was done basically just to make sure the pipe would cause no problems.

After putting in the new fuel tank, new pipes, and a new (restored) SU fuel pump we decided to try and start the car. It started right up and ran very nicely – not a hint on fuel starvation issues. But – at slow idle the engine made a tiny knocking or pinging sound…

So – on sunday we removed the engine and dismantled it to check the bearings. As hard as we looked we found nothing substantially wrong. The bearings felt good and there was no sign of any problems with them.

I also suspected that the port edges in the cylinder were too sharp. The edges should have a small (1 to 1.5 mm) chamfer at the edge to guide rings over them more smoothly. These chamfers had worn off and the edges were razor-sharp. Maybe one of the piston rings snagged slightly on one of the edges and that made the noise.

On this suspicion I used a small compressed air grinder to smooth the port edges and chamfer them.

I have never done any port grinding but Niklas Enanders XP Tuning Manual (www.classicsaabracing.com) gave some good info on it. The engine is somewhat worn anyway. If I botched the job the worst outcome would be that I needed to have it bored to oversize and get new pistons. That’s very likely going to happen anyway in the future so I went a head with it.

After we put the engine back together again it was time for another test run. Unfortunately the pinging sound was still there. This time we ran the engine longer and as it warmed up the sound disappeared. This leads me to believe that it might be the piston ring groove or maybe one of the piston sleeves is slightly too loose. As the sound disappears when the engine warms up I decided to live with it for the time being. When the sound becomes more substantial it is probably time to rebuild the engine with new pistons and a rebuilt crank.

One more thing – I swapped the ’66 flywheel for the heavier short nose flywheel to see how much of a difference it does to the character of the engine. It does indeed make the driving a lot smoother as it’s easier to drive the car in traffic and at slower speeds and revs. The ’66 engine with the lighter flywheel is somewhat more awkward to drive slow or when you need to stop often.

I had a little test drive on Tuesday. On Thursday it was time head for the Saab Club meet at Hyvinkää (some 400 km drive in total). The car worked very nice and run 120+ km/h easily at the highway. Swapping the tank (and the fuel line) was definitely the right move.

The next longer trip is to Saab Festival in Trollhättan. I have already booked the ferry tickets to Sweden…